A journey into my life. Most times cooking. Some times crafting. Always enjoying.

Leftovers, But Not Really

Have you noticed the price of food lately?  I don't know about where you live but here there has been such an increase in the price of everything in the last couple of months.  At the grocery store yesterday I paid almost $5 for a half gallon of milk (I buy the organic) and $3 for a dozen eggs.  I hope this isn't a sign that prices will continue to rise -- it'll be hard for a lot of people to feed their families.

In thinking about the cost of food I've been trying to use up as much of our perishables as possible before they have to hit the trash.  This past weekend I had purchased bread from Costco (6 mini loaves) and still had 3 left.  I knew they wouldn't last long so my mom and I brainstormed Monday night and came up with the idea of French bread pizza.  That was fine but I would have had to go to the store to get Mozzarella cheese and pepperoni (kind of defeats the purpose of "leftovers").   Then it hit me -- Rachael Ray's Nacho Bread Pizza.  I had all the ingredients in the house except for the tomatoes and everyone liked it the last time I made it (except Liam who doesn't like melted cheese so he had some baked chicken). 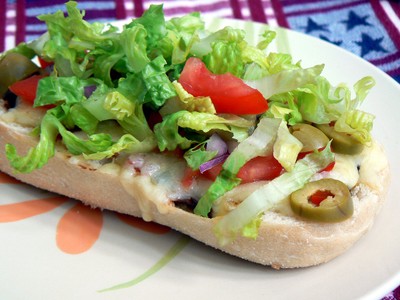 I even think the photo came out better this time.   The taste reminds me of a black bean burger (which I love) and I need to remember to make these more often.  For the cheese this time I used a combination of white cheddar and Monterey Jack -- I think those flavors are a little bolder than the yellow cheddar and is what I'd use next time.

Posted at 12:21 PM in Breads, Food and Drink, Sandwiches | Permalink

I am with you on the prices! I currently live in NY, and it is crazy! This morning I paid 3.00 for a microwavable progress soup - not even the can. I have also paid 1.65 for a small yogurt. Luckily fruit and vegetables are still inexpensive!

This is only a preview. Your comment has not yet been posted.

The letters and numbers you entered did not match the image. Please try again.

As a final step before posting your comment, enter the letters and numbers you see in the image below. This prevents automated programs from posting comments.

Having trouble reading this image? View an alternate.

(Name and email address are required. Email address will not be displayed with the comment.)